When Dustin Knoop, 34, and his wife first began scoping out apartments three years ago in some of the more established neighborhoods in Brooklyn, they were surprised at how little their budget of $500,000 got them.

So when their realtor suggested that they check out a new building in the under-the-radar area of East Williamsburg, they thought: Why not?

The neighborhood wasn’t as hopping as others they’d checked out, and it was a farther commute from Manhattan—but they were immediately sold when they saw the apartment. The one-bedroom had a large terrace and city views, was more spacious than anything they’d previously viewed, and it came in under budget.

Plus, after spotting a number of under-construction buildings nearby, they figured the purchase would also serve as a smart investment. “We were on the perimeter of the new developments,” Knoop says. “But we had a strong notion that this neighborhood was going to continue to get better.”

They were right: Between 2013 and 2014 the median home value in their area jumped more than 31%, according to stats from Zillow.com.

Getting a lot of bang for your buck is one of the benefits of buying in a so-called transitional neighborhood, and for the Knoops, settling in East Williamsburg was a no-brainer.

But that doesn’t mean the decision will come easily for everyone. After all, buying a home is as much an emotional investment as it is a monetary one. “You can’t simply look at a neighborhood in a financial light,” explains Greg McHale, a realtor with Urban Compass. “You also need to really believe in it as a place to live—to hang your hat and to grow.”

So once you’ve landed on a home that hues to your determined budget, how do you also ensure it’s situated in an area that will offer more than just affordability—but will actually grow with you?

To find the answers, we tapped three real-estate pros from across the country to clue us in on how to sniff out an affordable neighborhood on the rise.

RELATED: 6 Home-Buying Deal Breakers—and How to Troubleshoot Them

If you’re trying to identify the next It Hood, the area’s proximity to public transportation is one of the most revealing factors, according to real estate pros.

“In dense metropolitan areas, the neighborhoods that are downtrodden but still convenient are those primed for wholesale remodeling,” explains Michael Corbett, a real estate expert for Trulia and author of “Before You Buy.”

McHale’s tip? Pinpoint your favorite trendy neighborhood—and then take the local train or subway one or two stops past it. That’s how you’re most likely to spot emerging areas because they’re already linked to established routes of transit.

And convenience in transportation applies just as much to locales outside the city limits as it does to those inside—if not more so.

Noel Bushala, president and managing broker at Acorn Property Management in Chicago, also suggests looking for commuter rails. Former agricultural areas are now being radically transformed into bustling towns, he says, thanks to access to express trains that easily shuttle commuters into the city.

Speaking of accessibility, a neighborhood that’s adjacent to a much-desired one is much more likely to gentrify than one that’s surrounded by less prime areas. Corbett cites South Philadelphia, which borders the main business district, as a key example.

“It had not yet seen a neighborhood rebirth like the downtown Society Hill area, but because it’s located right near downtown Philadelphia, people started buying homes there and fixing them up,” Corbett says. “Those who did this scored great deals—and now South Philly is a beautiful neighborhood.” 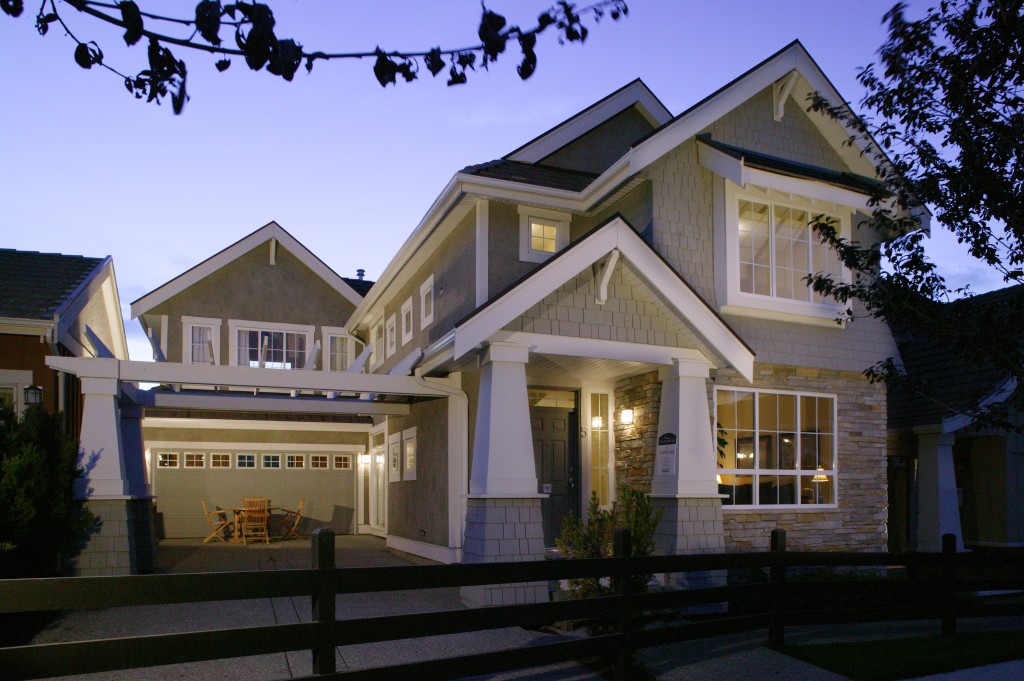 Bushala dubs this the “creep effect” and sees it as a valuable factor to consider when hunting for an affordable area on the up-and-up. In fact, when he and his wife were house-hunting in Chicago, they decided to close on a home just a few blocks west of what was then considered the borderline for gentrified neighborhoods.

“By barely crossing that avenue, we were able to buy a townhouse for about 15% less than a comparable townhouse just east of it,” he says. “Three years later we experienced a huge uptick in property value—and now that border has only continued to push even further west.”

RELATED: 5 Homeowners Reveal: The Biggest Home-Buying Mistake We Made

Days on market, or what real estate insiders call “DOM,” is a measurement of how long a property has been up for sale—and it’s a good indicator of a given neighborhood’s housing market.

The best way to get a sense of whether DOM is on the downswing is to look at listings of comparable homes for sale in the area, advises Corbett. If they’ve all been sitting on the market for 120 days, that’s not a good sign. But if most seem to be up for 10 days or less, that’s a pretty telling sign of a heating-up hood.

From a budget perspective, these numbers can be especially key. “The decline in the number of days on market can occur way before the home prices themselves actually increase,” says Corbett—which means keeping tabs on DOM stats can help you get in while the area is still affordable.

Trulia offers a heat map of general crime levels by neighborhood, as well as specific incident details. You should also consider scouring local blogs and news sites to get a feel for the area, or create an e-mail crime alert on a site like crimereports.com.

“If safety is increasing, that’s a really powerful sign,” Corbett says. “[That means] the marketplace is beginning to open up to a broader spectrum of buyers—more families, more young buyers and more single women.”

The experts agree: Artists are often the first agents of gentrification. “They have the vision to create homes in neighborhoods that have been forgotten or were once known for something else entirely,” McHale says. Translation: once questionable neighborhoods.

A large population of artists tends to mean galleries and restaurants will soon follow suit—which, in turn, attracts more residents and businesses. Revitalized areas like the Hudson Valley in upstate New York; Oakland, outside of San Francisco; and Chicago’s Pilsen neighborhood all attracted artists in the early stages of their growth.

When Renee Oger, 45, and her husband initiated their search for a new home in Austin, Texas, earlier this year, they settled upon the east side of the city because of its thriving music and film scene.

“This side of town hosts Austin’s newest culinary experiences, blues joints, farmer’s markets and film studios,” she explains. “So the area’s an eclectic magnet for budding creativity—indicating to us that it was really an up-and-coming place.”

RELATED: 4 Couples, 4 Home Purchases: How Much Can They Afford?

When it comes to the neighborhood search, you should also take into account the current stock of structures: Historically significant styles, in particular, are a good indicator that an area is ready for a renaissance.

“To me, anything from a Victorian to a Craftsman to a Federal Style house signals an opportunity,” McHale says.

Aficionados of the architecture that characterizes the neighborhood are the first ones typically drawn to the area, adds Corbett. “One of the most obvious signs of a turnaround neighborhood is homes that are in the process of renovation. Drive around and see if you spot construction trucks and dumpsters—then you know there’s activity in the air.”

RELATED: How Much Home Improvement Should You Do?

Neighborhoods that were historically centers of industry tend to be primed for reinvention, as well.

For instance, McHale says, if an area has a large stock of empty warehouses or buildings that can be repurposed into residential or commercial properties, that could mean loft apartments will make an appearance soon.

Big-box retailers spend millions of dollars in market research to determine where to open their next location. So why not piggyback off their findings for free?

In other words, if retailers—especially “mass affluent” ones like Whole Foods—deem a neighborhood is worthy of its next outpost, they’ve probably caught wind of a trend.

“To me, Starbucks and Whole Foods are always a darn good indicator that someone believes this is a neighborhood on the rise,” Corbett says. In fact, one 2007 study found that specialty grocers are actually the most telling indication that property values will go up—homes that are near them jumped an average of 17.5%.

But it’s not just big corporate brands that are worth paying attention to; keep watch for an influx of independently owned restaurants and shops. “I know it sounds silly,” McHale says, “but I personally look for pour-over coffee shops.”

When the Knoops were first apartment hunting, they used similar thinking: A cool cocktail bar around the corner and a bustling new restaurant nearby signaled, to them, that it was an area in the early stages of transition.

Turns out they were right. Now there are some 10 bars and restaurants in their neighborhood. And earlier this fall, an apartment in their building sold for a whopping 62% over the purchase price two years earlier.

“We figured that these new buildings and restaurants would draw more businesses to the area,” Knoop says. “Fortunately for us, that’s exactly what’s happened.”

RELATED: 5 Renos That Up Your Home’s Value … And 5 That Don’t

LearnVest Planning Services is a registered investment adviser and subsidiary of LearnVest, Inc., that provides financial plans for its clients. Information shown is for illustrative purposes only and is not intended as investment, legal or tax planning advice. Please consult a financial adviser, attorney or tax specialist for advice specific to your financial situation. Unless specifically identified as such, the people interviewed in this piece are neither clients, employees nor affiliates of LearnVest Planning Services, and the views expressed are their own. LearnVest Planning Services and any third parties listed, linked to or otherwise appearing in this message are separate and unaffiliated and are not responsible for each other’s products, services or policies.